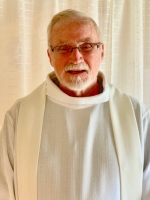 Vinnie was ordained in 1968 as a Roman Catholic priest in the Brooklyn Diocese and served as parish priest in Elmhurst and Bedford Stuyvesant. Shortly after being released from his vows in 1973, Vinnie met Bernadette, and they were married a year later. In the years that followed, Vinnie pursued a 20-year career as a federal probation officer, first in New York, then in Portland, Maine. He and Bernadette have two married children, a son in Vermont and a daughter in Cranford, NJ), and five grandchildren.

For many years, Vinnie struggled with his faith. Bernadette, a member of our parish since its beginnings, encouraged him to attend Bible Study with her. It was through those weekly meetings and the love and prayers of the “Friday night regulars” in the “Lower Room” that Vinnie finally experienced a change of heart and regained his faith. He says that “The Prodigal Son” is the one Bible story that always gave him hope, because “it’s all about compassion and forgiveness—and receiving a hug.”

Vinnie, who loves to receive and give hugs, was incardinated as a priest at Good Shepherd on May 12, 2019.