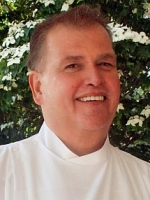 Feeling a strong calling to ministry at Good Shepherd, Terry began his studies for the Order of the Diaconate in November of 2017 and was ordained on August 29, 2020. His formation education included some traditional Catholic instruction combined with the study of literature and teachings aligned with the beliefs and ideologies of the American Reformed Catholic Church.  He leads Friday night Arise!meetings, authors the Prayer of the Faithful for weekly Mass, and serves as a Eucharistic/Pastoral Care Minister. Terry is a firm believer in the power of prayer and practices contemplative prayer daily.  He and his husband Brian have been together since 1993.